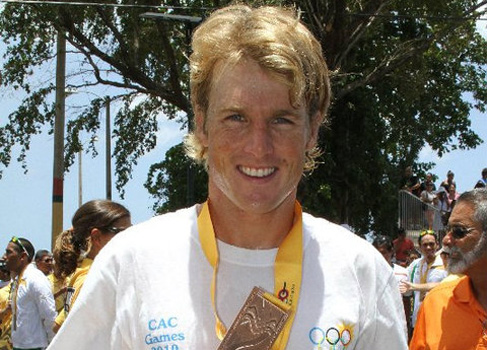 Today in Puerto Ricco at the Central American and Caribbean Championships Tyler had to settle for third place after the Mexican Team executed superb team tactics.

On September the 18th Tyler will head to Hawaii for the three weeks leading into the race (on October 9th) and stay in Hawaii until late October to compete in the X-Terra World Championships on the 24th of October in Maui.

Francisco Serrano, a strong all-round triathlete, led from start to finish entering transition two with a three minute lead. This allowed his Mexican teammate Crisanto Valencia to relax in the frustratingly uncooperative bunch as arguably the fastest runner, with no obligation to work as his teammate was out in front.

This is a classic cycling tactic. After the race Tyler commented he was “pleased to see this type of team racing pay-off in triathlon, the Mexican team raced very intelligently”.

Triathlon is still very new to the concept of team tactics.

Tyler was in the main bunch of fifteen out of the swim that contained all the main contenders excluding Serrano who was already off the front. With little to no cohesion in the bunch Serrano continued to gain time riding solo in first position.

Through the technical turns in the final sections of the bike Tyler was able to put a gap of 15 seconds between himself and his biking counterparts leaving him to run out of transition two in second place. Valencia ran across the gap to Tyler to put the Mexican team into first and second place, and Tyler into third for the day.

Tyler was hoping to regain some time in the second half of the run after all his endurance training he has been doing of late, but Valencia was just too strong.

In the last kilometer Tyler ran in with the Bermuda flag, high-fiving the crowd, acknowledging their support. Tyler is always one to give back to the supporters, thanking everyone for coming out to watch the race on such a hot and humid day.

Overall Tyler was pleased with his event and is looking forward to getting back to Boulder and into his Hawaii preparation. He will start his block three of five on Monday (he will complete a fifteen week preparation for Hawaii- five three week blocks of two weeks hard, one week moderate), capping off block number three with the Boulder 70.3 Half-Ironman on the eighth of August, where he was second last year.

Flora Duffy from Bermuda was second in the women’s event. She led for much of the day but the heat and humidity got to her in the final stages of the run. Flora is coming back into form after a rough few years of injury and illness. Tyler said after the race “Flora had a great day, she has proved once again she is one of Bermuda’s finest athletes. It was great for Bermuda to get a silver and a bronze medal here at the Games and for the sport of triathlon in Bermuda”.

Many have been enjoying Tyler’s recent interview with Competitor Magazine `Pro Q&A With Bermuda’s Tyler Butterfield’.

Mid-Season Update
Tyler moves up a step on the podium