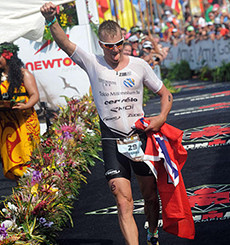 Tyler Butterfield is a rare sporting talent, having raced at the height of competition in two separate disciplines. A two-time Olympian in triathlon (Athens 2004 and London 2012) and a three-time Commonwealth Games contender (2006 in cycling and 2002 & 2014 in triathlon), Tyler is now focused on long distance triathlon and the sport’s “holy grail”, the Ironman World Championship in Kailua-Kona, Hawaii. Tyler has twice cracked the elusive top ten in Kona, first earning seventh in 2013, an especially poignant accomplishment as his father, Jim Butterfield, earned the same honor in 1981. Tyler’s 2014 season saw a victory over a world-class field at the highly competitive Abu Dhabi International Triathlon and a third place finish on the podium at Ironman France, a race known for having one of the most challenging courses on the iron-distance circuit.

Eager to improve on his prior Kona performance, Tyler’s 2015 season was entirely “Kona-committed” and included a number of notable performances at regional and world championship venues around the globe. Among his 2015 race highlights were a third place finish at the Ironman Brasilia 70.3 South American Championship, fifth at the Ironman 70.3 Mont-Tremblant North American Championship, eighth and the honor of first North American at the Ironman 70.3 World Championship and fifth overall and two iron-distance personal bests at Ironman Brazil – a 2:48 marathon run and an 8:05 overall time, despite a five minute penalty. Tyler began the 2015 season with a zero standing in the Kona Points Ranking (KPR), yet his standout racing garnered points at every turn and he ultimately earned his start in Kona and an opportunity to shine on triathlon’s world stage.

And shine he did, despite battling through severe stomach discomfort on the run, relying on his tried and true mental toughness to persevere. He started the marathon in ninth position, doubting his ability to hold onto a top ten finish. Yet Tyler pushed on, digging deep into his wealth of endurance experience, where both physical training and mental strength are requirements for success. He sucked up the pain and put one foot in front of the other, never letting up until he reached the line, ultimately clocking a 2:56 marathon split (8:23:09 overall) and scoring a career-best fifth place. This world championship result secured Tyler’s position among triathlon’s top long-course contenders around the globe.

Tyler’s athletic prowess is a brilliant blend of hard work and genetics–his father was an Olympic rower, a Commonwealth Games marathoner and an Ironman pioneer (setting the course run record in 1981), and his mother a marathoner–her fastest a year after Tyler was born at the U.S. Olympic Trials in Olympia, Washington (2:38:44 in 1984). Though Tyler is often seen as a strongman on the bike due to his stint on the European professional cycling circuit, he shows equal strength on the run, carrying on his fleet-footed parents’ legacy with frequent course record-setting splits, including a 1:07:52 half marathon at the 2010 Ironman 70.3 U.S. Pro Championship. Tyler proudly enjoys dual citizenship (Bermudian and American) and travels the world training and racing, accompanied by his long-time love Nikki and their three children, Savana, Walker and Grace. 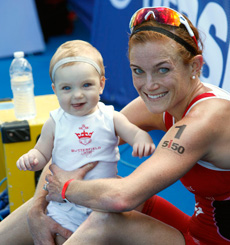 As versatile as she is fast, super-cyclist Nikki Butterfield excelled at running from an early age. With swimming and cycling added to the mix, Nikki proved a natural in all three disciplines and quickly carved her way through the elite ranks to earn an Under-23 Triathlon World Championship victory in 2003. In 2005, the fiery redhead from Brisbane added the title of Australian Long Course Champion to her resume, before shifting gears to focus on professional cycling.

Nikki’s proudest accomplishment to date, however, is most certainly the title of “Mum”, having given birth to daughter Savana Rose on December 22, 2010 and son Walker James on January 21, 2014. Never one to sit idle, Nikki completed her MBA in finance one month prior to Savana’s arrival, then five short months after giving birth she returned to the professional triathlon ranks. Her comeback was highlighted with a win at the 2011 Ironman 70.3 Syracuse, and in early 2012 she battled to a brilliant victory at the Abu Dhabi International Triathlon, laying down blistering bike and run splits against what was arguably the strongest women’s long-course field ever assembled outside of the Ironman World Championships in Kailua-Kona, Hawaii.

With Walker’s addition to the family in 2014, Nikki opted to devote her full-time energy to her family, although she returned to racing briefly to earn third at both the 2014 Ironman 70.3 Mandurah Asia-Pacific Championship and the 2015 Ironman 70.3 Silverman. In 2016, expecting the couple’s third child (daughter Grace) Nikki finalized her retirement plans from professional sport. Nikki, Tyler, Savana, Walker and Grace – along with two dogs, a cat and a horse – make their primary home in the mountains of Boulder, Colorado.