By Admin on September 12, 2017 in Press Releases, RESULTS 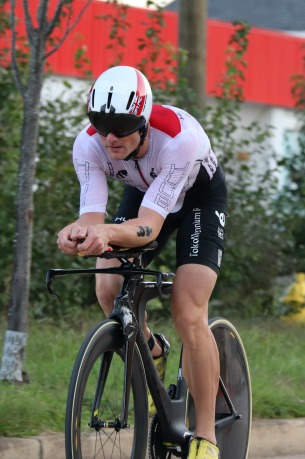 Butterfield clocked 25:20 in the 1.2-mile swim, emerging with the main group of men containing all the key contenders outside of swim leaders Ben Kanute, the eventual second- place finisher, and Javier Gomez, prolific triathlon champion and silver medalist at the Olympic Games, who went on to win.

Ten men—including Butterfield and Ironman world record holder Tim Don—rode in the chase pack, with hard-charging Sebastian Kienle, a two-time victor at the race, coming from behind. Entering T2, Butterfield was in third; within 30 seconds a flurry of six other top rivals flew in and out of transition and quickly sorted themselves out on the road ahead, with Butterfield now running in sixth. Gomez, known for his spectacular run speed, made quick work from further back in the field to knock off every forward challenger and claim the world title. Butterfield held steady and strong, and ultimately crossed the line in seventh with a 1:17:32 half marathon and 3:56:22 finish time.

“I wasn’t able to put in my usual attacks on the bike. It was hard enough just being there! Racing at this level gets more and more competitive every year. I looked around and everyone in the group was a world title holder, world record holder, or at least someone who has won a lot of races. You can’t just get away from these guys whenever you like,” said Butterfield.

“I also wanted to wait and test my run,” he continued. “I wanted to really get a feel for my run fitness in advance of Kona—something you can’t fully gauge outside of a race environment. I haven’t had the opportunity to get in the run training I’d like for a number of years—partly because of injury, but now, looking back, also because of where we lived.”

Since the family’s move from their mountain home to a farm in rural Boulder County, Butterfield has been able to run straight out the door, rather than spend time driving to and from town. Living at a lower altitude (5,600 feet, as opposed to 7,400 feet) has also allowed him to cope with a higher workload. Additionally, he has found that the convenience of being able to go home between sessions has helped his recovery.

“I was a little disappointed with my run, considering the training I’ve had. It was solid, but nothing special. Really, I should be running only a little slower than that for an entire marathon if I want to be in the mix in Kona,” said Butterfield, who averaged 5:55 minute miles in Sunday’s race. “I’m not sure if I was still a little tired from the training. I certainly gave this race the respect it deserves and came in tapered, but I think I may have carried in a bit too much long-term fatigue. I’m hoping I can get in the remaining training I need in the next five weeks, as well as shake some of the residual tiredness from my Kona overload. It’s kind of hard to do both at once—get fitter and fresher—but I’ll try.”

“I guess I like to keep my results orderly,” joked Butterfield. “In all seriousness, I do like the steady progress upward. It’s rewarding to see the results of all the hard work, as my entire family sacrifices year-round to help me be the best I can be. Hopefully with the focused training I’ve had so far and the time remaining, I can continue to improve all the way into Kona.”

Butterfield now heads back home to Colorado for his final Kona training block, with five short weeks remaining until the Ironman World Championship