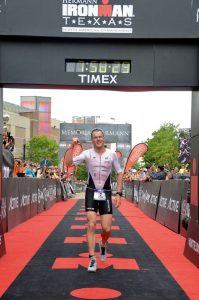 A number of changes, both professionally and personally, have proven beneficial to pro triathlete Tyler Butterfield’s 2017 racing season. Starting with a fourth place finish in January, Butterfield steadily progressed to a victory in June, and now has his sights set on another top performance at the Ironman World Championship in October in Kailua-Kona, Hawaii.

Butterfield kicked the cobwebs off in early 2017 at Ironman 70.3 Dubai, finishing fourth amid a world-class field. Next up was the Ironman North American Championship in The Woodlands, Texas, where Butterfield broke the eight-hour mark to earn third on the podium. He clocked a finish time of 7:58:29, holding off hard-charging rival and fourth-place finisher Will Clarke by 33 seconds. Butterfield’s upward trajectory continued in May at Ironman 70.3 Monterrey, the Pan American Pro Championship, where he scored second place, just 25 seconds shy of the win and bested only by men’s champion Kevin Collington.

In June, Butterfield headed to Ironman 70.3 Raleigh, where his run came into winning form. After a battle on the bike among the leading men, Butterfield started the half marathon more than three minutes in arrears to Andrew Yoder. He steadily gained ground, however, making the pass to claim the lead two thirds of the way into the run leg. His 3:53:22 finish ultimately gave him a 1:48 cushion over runner-up Yoder. This steady string of four impressive results was due in part to a focused winter where Butterfield—in contrast to prior years—avoided taking on too much travel and was able to get in sync in a solid training routine at home in Boulder, Colorado.

Butterfield also started June’s Ironman Boulder, intending to tackle the local course as a training exercise. Unfortunately, a slice in his tire while riding in third place derailed his plan. Butterfield awaited a local friend, who kindly secured a training wheel and helped him get back on the road after a 20-minute delay. In accepting “outside assistance” from his friend, Butterfield effectively withdrew from the competition, as athletes may only receive help from race officials; however, intent on making the most of the situation and logging a hard practice day, he continued. After 10 miles of the marathon—enough of an effort to justify time off during an upcoming holiday in Bermuda—he called it a day and pulled off the course.

Although Butterfield has spent more time grounded in Boulder than in years past, his family and home life has still seen several exciting and unusual changes in 2017. Baby Grace, the Butterfield’s third child, was welcomed into the family on January 12th, joining sister Savana and brother Walker. With a desire for space for their children to be outside and a growing passion for animals, the Butterfields moved from their mountain home to a hobby farm in Longmont, Colorado, where they’ve accumulated a large population of animals including five horses, three llamas, seven goats, a dozen chickens, two guinea fowl, two dogs and two cats. The children are thriving on farm life and Nikki (Tyler’s wife and retired pro triathlete) has her hands full with activities as diverse as mucking out horse stalls, bottle feeding baby goats, and assisting in the delivery of a baby llama (with Tyler’s help, as well). When not swimming, cycling, or running, Tyler is occasionally found driving a tractor.

The family will leave the farm temporarily in October to attend the Ironman World Championship, joining Butterfield’s parents, brother, uncle, and aunt, who make the journey annually. Nikki and the children have been in Kona in alternate years (depending on whether or not Nikki has been pregnant at the time), which seem to correspond to Tyler’s success on the island; they were there as support for his seventh place in 2013 and fifth place in 2015, while they had to skip the race in 2014 and 2016, when he did not finish. The entire family is hopeful that the year on/year off pattern continues for this year at least, and that with everyone on hand to cheer, 2017 will prove the best year yet for Butterfield.

About Butterfield Racing: A native of Bermuda, Tyler Butterfield’s athletic career has spanned professional cycling as well as triathlon and includes two Olympic bids (2004 & 2012, both in triathlon), three Commonwealth Games appearances (2006 in cycling and 2002 & 2014 in triathlon) and a victory at the highly competitive Abu Dhabi International Triathlon (2014). Tyler’s efforts are now focused on long distance triathlon and the Ironman World Championship, where he finished seventh in 2013 and fifth in 2015, working his way through the elusive top ten and earning his position among triathlon’s top contenders around the globe. Tyler and wife Nikki (also a former professional triathlete and cyclist) make their home on a hobby farm in Longmont, Colorado with their children, daughter Savana, son Walker and baby girl Grace, plus two dogs, two cats and a growing population of horses, llamas, goats, guinea fowl, and chickens.