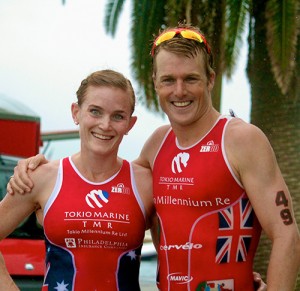 Tyler and Nikki Butterfield have enjoyed numerous sporting victories and podium finishes during a month-­‐long visit to Tyler’s home country of Bermuda. The couple is encouraged by Tyler’s early season results–highlighted by his win at the Abu Dhabi International Triathlon in March–and optimistic about his long-­‐term training plan with a focus on October’s Ironman World Championship in Kailua-­‐Kona, Hawaii.

Tyler’s home turf winning streak began with the Catlin Bermuda National Triathlon Championships on May 11th. In addition to clinching the title by a 15-­‐minute margin, Butterfield collected 100 ITU points, critical currency in the process of qualification for the Rio 2016 Olympic Games.

On May 26th, Tyler successfully defended his title at the Bermuda Day Half-­‐Marathon, an iconic event headlining a public holiday and which Tyler’s mother, Debbie Butterfield, won a record seven times. His 1:11:16 run showed an improvement of nearly four minutes from his 2013 finish, providing both a confidence-­‐building and crowd-­‐pleasing performance. Nikki was also welcomed to the competitive ranks by race organizers–a position normally reserved for Bermudian citizens and full-­‐time residents–and was honored to finish second behind Tyler’s cousin, Ashley Estwanik.

“I was so happy to be able to experience the crowds that Tyler’s been raving about for years. I watched him at the race in 2002 when were just dating on my first trip to Bermuda,” said Nikki.

Finally, on June 8th, both Tyler and Nikki toed the line at the Tokio Millenium Re Sprint Triathlon, bringing home a double victory in an event that is particularly important to the Butterfield family due to Tokio Millenium Re’s longstanding support of the couple’s athletic pursuits. Tyler was proud to score the men’s title surrounded by family and friends.

“It really is thrilling to race here at home in Bermuda and in Tokio Millenium’s backyard,” he said. “The company has stood by me for more years than I can count, so anytime I can include this race on my calendar it’s an honor and a pleasure to be here to support them in return.”

Nikki, who has only recently been focused on running (following son Walker’s birth four months ago) and lacked any cycling or swimming preparation, was excited and surprised by her winning performance.

“I thought I might be able to do something like that, but I wasn’t sure if my body would remember how,” said Nikki. “I’ve been doing some running, so I guess that fitness carried me through the swim and bike, too. Tokio puts on a great event, so I’m thankful I could find something today.”

As the Butterfields prepare to depart Bermuda this week, Tyler’s attention will turn toward a series of races which, while each important in and of themselves, ultimately serve as stepping stones on the path to the Ironman World Championship. His first stop will be Mexico for the Huatulco ITU Triathlon World Cup on June 15th, another opportunity to earn ITU points toward Rio. Then, following a fleeting five days at home in Colorado, Tyler will head to France to compete in Ironman Nice on June 29th.

“Ironman Nice is an important piece of my Kona preparation for 2014. It is one of the hardest races on the circuit. I respect my competitors and the level required to be successful there. I’m not expecting anything special, but I hope to be able to do something solid,” said Tyler. “I’m hoping I don’t come out of the swim behind as I’ve let my swim drop a little while I’ve been here in Bermuda. The bike course has a long climb, which I really like, so hopefully that suits me, and then I’d like to run well. We’ll see what I have on the day.”

Following France, Tyler will enjoy only another 10 days in Boulder before returning to Europe–this time to Glasgow, Scotland for the Commonwealth Games on July 24th. While Tyler is aware that he’ll arrive in Scotland on fatigued legs due to the bigger picture planning of his season toward Kona, he wouldn’t pass up the opportunity to represent Bermuda at such an esteemed event and will certainly give his best effort as he flies the Bermudian flag.

August will mark the start of a solid two-­‐month build to the October 11th Ironman World Championship. The Butterfields plan to remain in Boulder until mid-­‐September, then relocate to Kona for the final month in order to exactly replicate Tyler’s 2013 preparation, including travel dates and time spent at sea level and acclimating to the heat and humidity prior to the race. His aim will be to better his 2013 performance, where he broke through into the elusive top 10, finishing seventh with a time of 8:24:09.

Nikki, while focused first and foremost on motherhood (Walker’s older sister Savana is now three and a half), is considering a comeback of sorts, with an eye on the highly touted inaugural Challenge Bahrain half-­‐distance race on December 7th. For the time being, however, “I’m using an emerging strategy,” she says. “Instead of choosing a race and planning backwards from that, I’m just fitting in what works for our family and then I’ll pick a race–possibly–when I feel ready. For the moment I’m happy being a mom, helping Tyler however I can and doing some running. I’m fully committed to keeping our household as calm as possible until after Kona. Then we can reassess who wants to do what later this year and in 2015.”