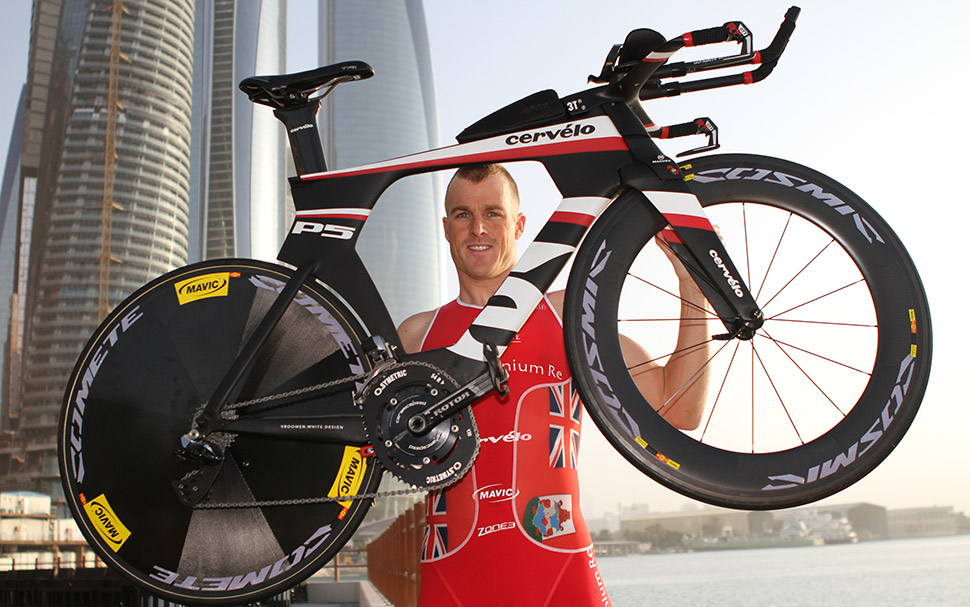 March 19, 2014 – Boulder, Colorado – Cervélo is excited to announce the signing of two-time Olympian and long-course triathlete Tyler Butterfield to a lifetime contract.  Butterfield was a 2006 Commonwealth Games contender in cycling, and he raced for several years on the European professional cycling circuit. In 2009, Butterfield returned to triathlon, and started racing with Cervélo in 2012.  Cervélo is the perfect fit for Butterfield and his powerful bike skills because Cervélo has unbeatable aerodynamics while sacrifices nothing in weight or stiffness.

Fresh off his first major professional win at Abu Dhabi International Triathlon last Saturday, March 15, 2104, Butterfield has started off the 2014 season with a bang. He will follow Abu Dhabi with Ironman France in June, and finishing at Ironman World Championships in Kona, Hawaii on October 11, 2014. Butterfield is young in his long course triathlon career with many exciting years ahead. Cervélo has watched Butterfield advance quickly in long course racing while still remaining a contender on the ITU circuit. Knowing his deep talent, hard work and dedication to the sport, Cervélo is proud to support Butterfield with a lifetime contract, which was solidified before the start of the 2014 racing season.

“During negotiations with Cervélo, the team was stating their confidence about how I could win major races, and, of course, I wanted to believe them,” said Tyler Butterfield. “I was humbled in how they could have this much belief they had in me at the start. It was very motivating for me and made me start to think of myself that way a little too. “

“I’m not particularly motivated by money, prestige, or any of the normal things and maybe that’s why I haven’t won much before. However, it really motivates me when I feel like I’m doing it not just for me but for others too. That’s a part of the reason I went to cycling for a while- I really like being part of a team and enjoyed working for my team-mates more than trying to go for the win myself. Now, I feel like I’m working for my team again. It suits me having it set up like that so I have something to race hard for other than myself.”

“It’s not every day you are presented with an athlete like Tyler,” said Lesley Loughlin, Triathlon Marketing Manager at Cervélo. “His commitment, drive and passion for all he does in life is contagious. We are extremely proud that he is a part of our team. We will ensure he has the support, tools and fastest bike available to achieve all of his goals.”

“I am honored to commit to Cervélo with this lifetime contract,” said Butterfield. “There is no other bike on the market parallel to Cervélo.  The aerodynamics, fit and precision are exceptional. Cervélo is at the top of innovation, and the team behind the brand are all incredibly supportive and helpful.”

About Tyler Butterfield: Tyler Butterfield is a two-time Olympian in the sport of triathlon, husband to former stand-out professional triathlete Nikki Butterfield and new father of two children ages 3 and under. Butterfield is a native of Bermuda with dual citizenship in Bermuda and the United States. Formerly, Butterfield focused on Olympic distance racing through the Athens 2004 Olympic Games, did a stint on the European cycling circuit the next few years and returned to triathlon in both long and short-course races with multiple podium finishes. Even though Butterfield’s results in the long-course races were better, the 2012 London Olympic Games were priority. After successfully competing in his second Olympic Games, Butterfield returned to his strength. In 2013, Butterfield switched his focus back to long-course racing and steadily rose through the ranks to one of the world’s top long-course athletes with four podium finishes and closing out of the season with a seventh place finish at Ironman World Championships.

About Cervélo: Phil White and Gérard Vroomen founded Cervélo in 1995 when their design for a new time trial bicycle failed to garner interest from traditional bike industry manufacturers. Today, Cervélo is the largest manufacturer of elite triathlon bikes in the world. The brand partners with Ironman World Champion Frederik Van Lierde and other top triathletes, as well as one of the world’s top pro road cycling teams, Team Garmin-Sharp. Cervélo is recognized internationally as one of the most innovative and fastest growing bike manufacturers. Readers of VeloNews, CycleSport, Inside Triathlon and Slowtwitch (all publications for serious cyclists and triathletes) all voted Cervélo as the #1 brand they intended to purchase in 2011. For further information visit www.cervelo.com.