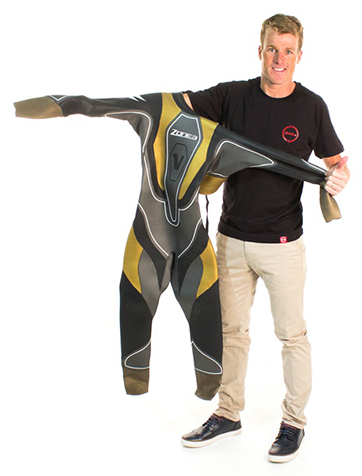 In his ongoing quest for professional triathlon excellence and personal  best performances, and building on a successful partnership that began in 2014, Tyler Butterfield will proudly represent Zone3 as his official swim sponsor for another year term.

The leading wetsuit brand in the U.K. and one of the fastest growing throughout Europe, Zone3 (racezone3.com) launched in 2009 after years of research and development by elite athletes at Loughborough University, one of Europe’s leading sports research facilities. The company’s athlete—focused, product—first philosophy and extreme attention to detail make it an ideal fit for Butterfield’s discerning taste  and intense training and racing demands.

“I’ve been extremely fortunate to work with a brand like Zone3,” said Butterfield. “They’re at the absolute cutting edge of product technology,  and yet they’re always seeking improvement based on feedback from athletes at all levels of sport. They listen and understand the athletes’ needs and work hard to design products that put us in the best possible position to achieve success. I’ve loved the exceptional performance of their wetsuits and swim skins as well as the incredible encouragement from the team behind the scenes, and I’m thrilled to continue forward with their support.”

With a new product range built on seven years of award winning reviews, elite athlete feedback and thousands of demo sessions, combined with highly innovative materials and construction technology, 2016 will see Zone3’s best collection yet. This momentum further fuels the brand’s excitement in working with Butterfield and backing his similarly mounting success.

“We’re extremely proud, honoured and excited to partner with Tyler for a further two years,” said Jake Presley, Zone3’s Sponsorship Manager. “Not only have we had a great relationship with him thus far, we’ve seen him rise through the ranks of Ironman, proving himself an exceptional athlete and equally powerful ambassador for the brand. His fifth place finish at Kona 2015 illustrates the progress he has made in the last few years and we hope we have helped along the way as his official swim sponsor. Tyler is an unquestionably dedicated,  hard-­‐working  professional, and we wish him all the best in the coming years,  swimming in our Victory D wetsuit and swim skin and continuing on in his quest to reach the pinnacle of the sport.”

Butterfield’s relentless pursuit of triathlon excellence will include stops at the Ironman 70.3 North American Pro Championship in St. George, Utah and a first time appearance at the iconic Challenge Roth in Germany. His efforts will then hone in on the 2016 Ironman World Championship  in  Kailua-­‐Kona,  Hawaii, where he wowed in 2015 with a personal best top five finish.