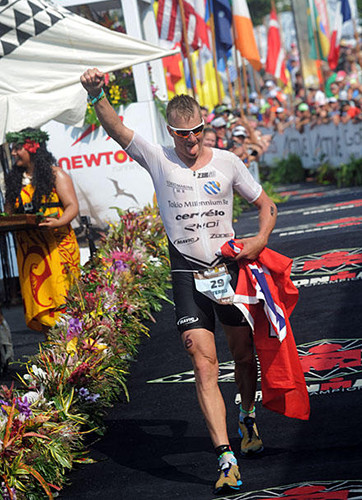 Tyler Butterfield highlighted his 2015 race season with a career-best performance at the Ironman World Championship in Kailua-Kona, Hawaii, proving the unwavering dedication of his “Kona-committed” campaign, a season focused on reaching the start line at the world championship. Butterfield’s fifth place finish rewarded his relentless hard work, the culmination of a season that began with a zero standing in the Kona Points Ranking (KPR), yet wherein he steadily worked through the rankings, garnering points at every turn, to ultimately earn his start in Kona and an opportunity to shine on triathlon’s world stage.

Butterfield’s road to Kona included stops at regional and world championship venues around the globe. In April, Butterfield scored third at the Ironman Brasilia 70.3 South American Championship. In May, he competed at the Ironman 70.3 St. George North American Championship where, despite a mechanical issue which set him back five minutes, he continued on to finish thirteenth, off the podium but with an integral practice race under his belt. Butterfield then returned to Brazil for a fifth place finish at the South American Ironman Championship, clocking two personal bests at the full distance – a 2:48 marathon run and an 8:05 overall time, which included a five minute penalty.

Three weeks after his strong showing at Ironman Brazil, Butterfield claimed fifth at the Ironman 70.3 North American Championship in Mont-Tremblant.  Only two weeks later he toed his next start line, this time earning seventh at the sweltering Ironman Frankfurt European Championship in July. Following a focused training block, Butterfield tested his form at the Ironman 70.3 World Championship in Zell Am See and raced his way to eighth overall and the honor of finishing as the first North American. The discipline and talent that Butterfield exhibited throughout the year ultimately paid off with more than performance accolades; he secured his start in Kona, ultimately reaching 25th in the KPR heading into the Ironman World Championship.

In Kona, Butterfield’s standout performance belied how he was feeling throughout the race. The swim, normally not his strongest discipline, was the best he felt all day, he reported afterward, while both the bike and run presented non-stop struggles.

“I had done so much hard motor pacing on the bike in training, short intense efforts that I thought would help me react to the constant surges that happen on the bike in Kona, but in reality I was hurting. I never found a rhythm, which can be discouraging when cycling is usually one of my strengths” said Butterfield. “That’s when it’s important to keep the mental battles at bay and the pressure on myself to a minimum. I simply did what I could to stay in the moment and stay in the mix.”

Butterfield indeed stayed in the mix with the main contenders, reaching T2 in ninth position. He again felt at odds with his body through the early miles of the run, however, his stomach rebelling against the critical nutrition he tried to ingest.

“Every time I tried to take in fuel, my stomach was bloated and upset,” said Butterfield. “But I knew my only choices were to run through or risk bonking and blowing up completely if I didn’t take in any nutrition. I just kept trucking along, one foot in front of the other, but I never felt good, and I certainly didn’t think I would move up through the field. At that point I wasn’t even confident I could hang onto a top 10.”

But patience paid off, as Butterfield settled into the stomach discomfort and was eventually able to push the pace later in the marathon, ultimately moving into fifth place and clocking a 2:56 run split and an overall time of 8:23:09. Fearful of being passed in the final stretch on Ali’i Drive, Butterfield never let up until he crossed the line, although he did grab a Bermuda flag from his parents and proudly fly his country’s colors in triumph down the finish chute. Among the contingent of family members on hand to witness Butterfield’s historic performance were his wife Nikki, daughter Savana, son Walker, parents Debbie and Jim and Aunt Georgia and Uncle Miller. The moment was especially meaningful as it marked a passing of the torch of sorts, in that Butterfield’s prior Kona best (seventh in 2013) was equal to his father’s seventh overall finish when he raced Kona in 1981.

Currently third in the 2016 KPR, Butterfield plans to race Ironman Cozumel on November 29, his fourth full Ironman race in six months, in order to validate his start line status for Kona 2016. His 2016 season will feature a similarly heavy load of racing, even though his position in Kona is secure.

“I won’t ease off my race schedule just because I’ve already qualified. Racing frequently suits me – I proved that this year. But I’ll race more of the 70.3 distance. I love that distance. It keeps you honest and keeps you testing yourself, and allows you to race more often without the fatigue of Ironman.”

As to his future Kona dreams, Butterfield is optimistic, yet pragmatic. “First I wanted to scrape into the top 10,” he says. “Then the top five. Now I’ve reached that goal and the next step would be top three, and then who knows. But honestly, I’d be happy with another top 10. There are another 50 guys gunning for those spots and anything can happen. But I do tend to perform well at the big races, in large part because of the guys in front. They inspire me and push me to push myself. The opportunity to race against them is a big part of what keeps me Kona-committed.”