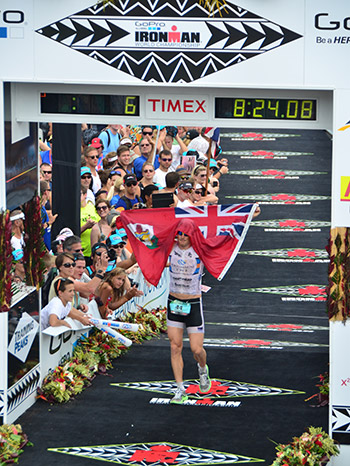 Tyler Butterfield today announced his intention to focus fully on long-­course racing, thus ending speculation of a return to ITU racing and a potential third Olympic bid on behalf of his native Bermuda. Subsequently, Butterfield will withdraw from all related funding from the various associations that have helped support his ITU career: the International Olympic Committee (IOC), the Bermuda Olympic Association (BOA), the Bermuda Triathlon Association (BTA) and the International Triathlon Union (ITU).

Butterfield expressed his deep appreciation for the support of these national and international organizations throughout his short-course triathlon career. “It’s been an absolute privilege to represent Bermuda at two Olympics, three Commonwealth Games, two Pan American Games, Small Island Games and Caribbean Championship races. I’m extremely grateful for the support I’ve received,” said Butterfield. “I’ve made this choice with much difficulty. While I’ve been tempted to continue on in hopes of flying the Bermudian flag at the Rio Olympics, I recognize that in the big picture of my career, I would be spreading myself too thin. In order to get the best out of myself as an athlete in pursuit of my current triathlon goals, in particular with hopes of an exceptional performance at the Ironman World Championship in Kona, I need to apply myself to long-­course training and racing one hundred percent.”

Thus, Butterfield will remove himself from all IOC, BOA, BTA and ITU funding opportunities and will no longer compete in the ITU series nor any of the Games. As Bermuda’s top-­ranked male professional triathlete, Butterfield is heartened by the prospect of passing the ITU torch to his successors. “I hope the funding I’m forgoing passes on to the next generation of up and comers. I look forward to following their progress,” he said.

Coinciding with Butterfield’s announcement, his wife Nikki has decided to step back from the professional triathlon ranks in order to devote fully to her family. Nikki made a brief return to sport in late 2014 following the birth of the couple’s second child, Walker James. She earned her way onto the podium less than 10 months after welcoming her son, finishing third at the Ironman 70.3 Mandurah Australian Pro Championship.

“I don’t want to miss out on these younger years with our kids. I can never get this time back, and I miss them so much when we’re apart and I’m off training. I think I needed to go through this process to remind myself I’m not a mum who can compartmentalize the way you have to in order to do it all,” said Nikki, referring to her previous struggle–despite great success on the race circuit–with a return to racing after daughter Savana’s birth.

Furthermore, Nikki expressed her desire to support Tyler’s continued athletic ambitions. “I always said there’s no point in both Tyler and I being average–better for one of us to reach our full potential, and Tyler still has so much passion for the sport. Plus, he’s the real Ironman talent in the family and stands to be a contender in Kona. I really enjoy the support role–helping him stay focused on triathlon while keeping our home running smoothly, cooking healthy meals for our family and creating engaging activities and learning opportunities for our kids. When I was training I was too exhausted to put as much effort as I wanted into the home front, and as much as I love triathlon, being a mum is my number one passion and I want to give my all to our family.”