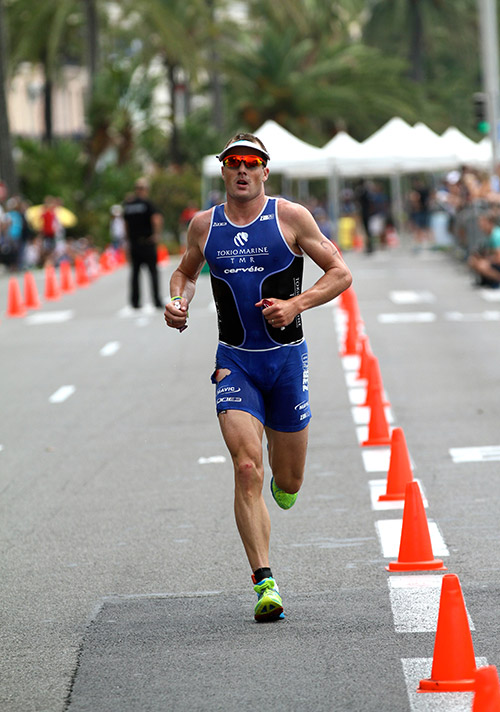 A mere two weeks following his third best career ITU Triathlon World Cup finish (eighth at the Huatulco ITU Triathlon World Cup), Bermuda’s Tyler Butterfield utilized his bike and run strength to score a third place podium at the iconic Ironman France in Nice. The pair of race results, representing opposite ends of the triathlon spectrum in terms of sprint speed (ITU) versus long-distance endurance (Ironman), proves Butterfield’s talent across the board in tackling a variety of competitive challenges.

Emerging from the Ironman France swim two minutes off the lead, Butterfield quickly formed a chase pack with several other riders, including longtime friend and training partner Mathias Hecht and eventual race winner Bart Aernouts. The group worked together to minimize the damage done by lead cyclists Jeremy Jurkiewicz and Bertrand Billard, who enjoyed a clear advantage until the halfway point, when Aernouts successfully bridged the gap. The Butterfield and Hecht group remained a few minutes in arrears, content to ride cautiously on the rain-drenched course. It seemed no man was immune to the slick roads, however, as nearly all of the top contenders–Butterfield included–suffered minor crashes along the ride’s steep and slippery descents.

Arriving first through third into T2 were Billard, Aernouts and Hecht. Butterfield was fourth to reach transition, 9:33 behind Billard, but he quickly found his running rhythm and whittled time away from the race leader. Ultimately, Aernouts held on for the win, Billard fell back, Hecht succumbed to a nagging injury, fast-moving Victor Del Corral sped through the field into second and Butterfield kept a strong and steady pace to secure third and a spot on the podium, equaling his own best Ironman marathon time of 2:49:39 and finishing in 8:40:56.

“I’m absolutely thrilled with my result today, and honestly a bit surprised,” said Butterfield. “Going into the race I hoped for the best, but I really wasn’t sure if I had it in me, especially after racing ITU just two weeks ago–the speed and skills required are completely different. But as with every race, ready or not I give it my all when the gun goes off. I’m just so happy this one went well for me.”

Butterfield now returns home to Boulder, Colorado for a two-week training stint before again traveling abroad to Glasgow, Scotland for the Commonwealth Games on July 24th. Then he’ll finally settle into an uninterrupted block of time back home in Boulder, an opportunity to focus one hundred percent on October’s Ironman World Championship in Kailua-Kona, Hawaii.

“The Commonwealth Games are so exciting,” said Butterfield, a previous contender in road cycling at the event’s 2006 edition. “It’s a point of honor and pride to represent Bermuda on the world stage at such a prestigious race. But I’m even more excited for the Kona build that comes afterward. There have been some really incredible Ironman performances this season, so it’s no secret that the field in Hawaii will be tougher than ever, and it will take every ounce of focus and determination to make a mark there this year. I know I have my work cut out for me, but I’m excited to attack it and to give everything I have toward my goal of racing my best Kona ever.”