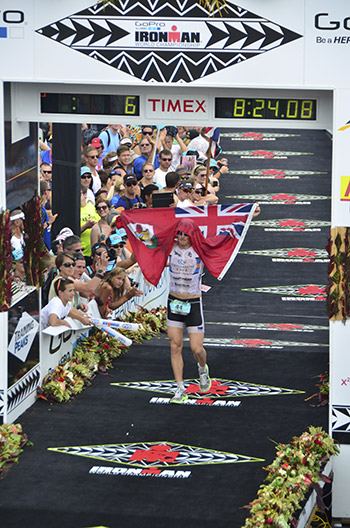 Boulder, Colorado – Tyler Butterfield, two-time Olympian and top long-course triathlete is excited to announce the continued partnership with Tokio Millennium Re (TMR). Unlike most endemic sponsorships, TMR is unique because they provide risk coverage for insurance and reinsurance companies through alternative risk transfer products. Butterfield, a native of Bermuda is honored to represent the prestigious Bermudian company throughout his races while continuing to bring awareness of the innovative, health-minded company to the sport of triathlon.

Butterfield has continually advanced his career each year that he races. Whether his focus is representing Bermuda in short-course triathlon or bringing awareness to his country in long course races, TMR has been by his side. He was honored to partner with TMR in 2010, race with them in the 2012 London Olympic Games, 2013 Kona Ironman World Championships and now into the 2014 racing season. TMR has found great reward in their partnership with Butterfield because it allows them to help a gifted, young, Bermudian athlete achieve his goals, while empowering and inspiring its staff by being a part of the professional world of triathlon. The company is thrilled to partner with Tyler Butterfield as he aims to conquer triathlon titles around the globe.

Tatsuhiko Hoshina, CEO of TMR and an accomplished Ironman triathlete has a keen interest in the sport and encourages the company’s involvement in numerous races “TMR has always been committed to Bermuda sport and youth programs,” said Mr. Hoshina. “As a Bermudian from a terrific local family, Tyler Butterfield has and continues to be a wonderful ambassador for our nation. He is by far Bermuda’s most accomplished athlete, and as such, is a great role model for not only the youth both in Bermuda but also worldwide. At TMR we believe firmly in Tyler’s talents and are proud to be able to sponsor him and see him continually grow in the sport.”

“It is an honor to extend the partnership with Tokio Millennium Re”, said Tyler Butterfield. “There are few companies outside of the athletic space who invest in athletes, but TMR takes their commitment to youth programs and athletics to the next level. Their corporate structure is rooted in giving back while focusing on living healthy, active lives, and it is a privilege to represent them while I give it my all to achieve my professional goals.”

About Tyler Butterfield: Tyler Butterfield is a two-time Olympian in the sport of triathlon, husband to former stand-out professional triathlete Nikki Butterfield and new father of two children ages 3 and under. Butterfield is a native of Bermuda with dual citizenship in Bermuda and the United States. Formerly, Butterfield focused on Olympic distance racing through the Athens 2004 Olympic Games, did a stint on the European cycling circuit the next few years and returned to triathlon in both long and short-course races with multiple podium finishes. Even though Butterfield’s results in the long-course races were better, the 2012 London Olympic Games were priority. After successfully competing in his second Olympic Games, Butterfield returned to his strength. In 2013, Butterfield switched his focus back to long-course racing and steadily rose through the ranks to one of the world’s top long-course athletes with four podium finishes and closing out of the season with a seventh place finish at Ironman World Championships.

About Tokio Millennium Re: TMR’s mission is to create value for its clients by providing strong financial security and high quality solutions using unparalleled expertise, quantitative focus and state of the art technology. Since its inception, TMR has contributed to the strengthening of worldwide reinsurance capacity by providing catastrophe risk coverage for insurance and reinsurance companies through traditional reinsurance and innovative alternative risk transfer (ART) products. TMR’s sound financial footing allows the company to act as a strategic risk diversifier for the Tokio Marine Group, working together to enhance its capital efficiency.