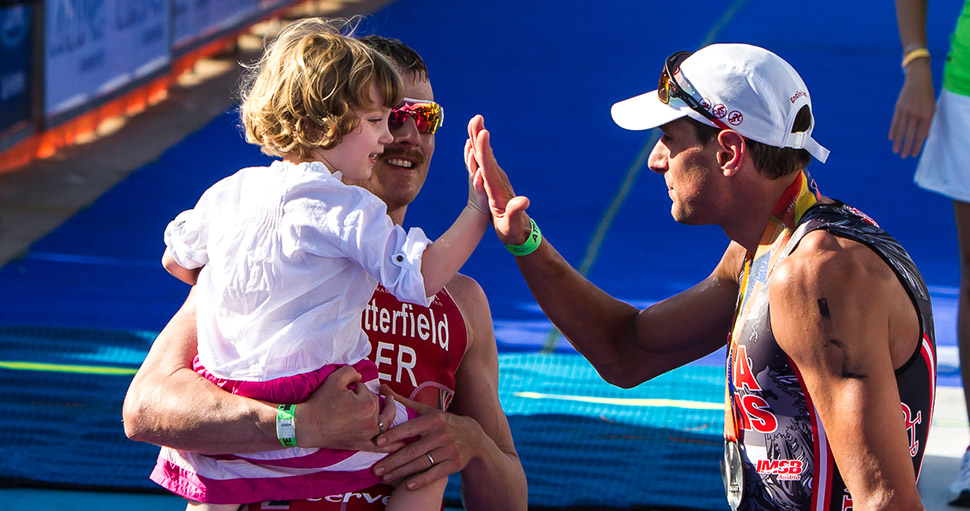 Tyler Butterfield topped off a breakthrough 2013 season with a second place finish at Sunday’s Ironman Cozumel. His podium worthy performance was propelled by a 2:49 marathon, his best Ironman run split to date.

The Ironman Cozumel result adds to Butterfield’s already impressive 2013 race tally, wherein he placed third at the Abu Dhabi International Triathlon in March, scored two Ironman 70.3 podiums (Calgary and Muncie), finished ninth at the Ironman 70.3 World Championship and—in perhaps his standout event of the year—earned a hard fought seventh place finish at the Ironman World Championship in Kona where he remained in contention for an even greater result until the final two miles of the marathon. Butterfield’s 2013 season is even more remarkable given that only last year he represented Bermuda at the London Olympic Games in the ITU distance of triathlon, after a two year qualification process in short course draft legal racing. During that time Butterfield bore the responsibility of racing fast and frequently enough to earn the requisite number of points to secure a spot for Bermuda on the Olympic start line.

When asked about the difference between 2013 and his past experience in professional triathlon racing, Butterfield said:

“A lot of things are coming together for me. I’ve been racing professionally since I was a teenager, and every year you just get stronger, wiser and understand what works for you better and better. I love racing ITU as it gives me a chance to represent my country in events like the Olympics and the Commonwealth Games, and because the racing style forces you to constantly improve because there’s simply no room for error, but I’m finding that the Ironman distance is what suits me physically more than anything else. Both my Mom and Dad were good marathoners amongst other endurance sports, so it’s in my genes to focus on the longer events.”

“The other thing that has helped this year is that my home life has really settled down,” he continued. “I remember Chris [McCormack] saying in 2006 that the difference between the years he wins and doesn’t win is having everything else in his life sorted and settled. I understand that now. When Nikki was racing, too, I spent a lot of time and energy trying to help her reach her potential, because I thought she had a better chance at being successful than me. But we realized that what she wanted most was to be with our kids, so once she stopped racing that allowed me to focus fully on my career. Nik has really taken on helping me now, so all I have to worry about is making sure I show up fit and healthy to race. She does pretty much everything else.”

The bike leg at Ironman Cozumel was slightly chaotic for Butterfield. Two screws fell out of his aerobars and he had to stop at an aid station and borrow an allen key–otherwise it’s unlikely he would have completed the event, let alone finish in a good position. Fortunately the timing worked to his advantage, as eventual winner Michael Weiss rode past when Butterfield was sidelined by the mechanical, thus giving him a motivational carrot to chase back to the main group.

“It was a little disappointing to have to stop and fix my bars, because if Michael had caught our group without me having to put in the effort to chase back on, I might have tried to go with him when he broke away,” said Butterfield. “But after the effort it took to catch back up, I knew that would be a silly decision. My primary goal was to finish the race rather than win, so I played it conservative. Maybe it worked out for the best anyway–I certainly wasn’t expecting second place yesterday, so I was surprised and thrilled to finish that high.”

Weiss started the run with an eight minute head start over the remains of the men’s lead pack–Butterfield, Eneko Llanos and Nils Fromhold. Butterfield ran the first half of the marathon at what felt like six minute miles, opening up a minute gap over renowned runner Llanos. At the halfway point in the marathon, he passed his wife on the sidelines.

“I told Nikki, ‘This will be fun until I start walking ’” said Butterfield. “I was expecting to blow up at any moment during the race, as I just hadn’t done the work between Kona and Cozumel that I would usually ask of myself when aiming for an Ironman podium. But I guess I have more residual fitness from my Kona prep than I realize. I thought for sure Eneko was going to pass me, and I would certainly have been content with third–although I was a little worried fourth would pass me, too!”

Ultimately, Butterfield’s fitness held up and he crossed the line in second. Reflecting after the race, he said:

“I can’t thank my family, friends and sponsors enough for all the support over the last few years–for my whole career so far, in fact. Everyone has stood behind me no matter which path I’ve decided to take–ITU, cycling, Ironman, ITU and now back to Ironman. It’s a huge motivator for me to know that I have their support no matter what.”

“I’m now looking forward to a few weeks of down time–time to put up our Christmas tree, get ready for our families to arrive and await the birth of our son Walker ” said Butterfield. “Then on January 1st I’ll start serious preparation for Abu Dhabi. I especially have to make January count this year, as our son is due on February 1st and I’d like to help Nik out as much as I can. She’s pretty self sufficient when it comes to the kids, but I want to be around as much as possible. After Abu Dhabi I’ll take a short break, then most likely prepare for Ironman Nice–depending on whether I keep Nice on my schedule, now that my Kona qualification is pretty much certain. Then I’ll focus on the Commonwealth Games in July, where I’m excited to once again represent Bermuda at a world class event. Once the Games are over, my focus will shift 100 per cent to Kona. I’m really looking forward to going back to the Big Island–it’s so motivating to compete against the best guys in the world in their best form in a race with so much history. And I’ll do my best to beat my Dad’s place this time!”